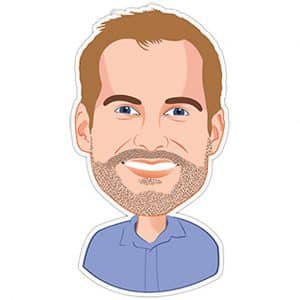 Coding a website at 11 wasn’t the social booster I expected, but it all worked out. Someone amazing married me, I have two great kids and have had the pleasure of founding a few ventures including: The Ad Managers Inc. (an online marketing agency), a digital marketing tool, a line of biodegradable poop bags, and a network of lead generation websites.

After some very fun years at the University of Guelph, I was given a piece of paper saying I had a Bachelor of Commerce with honors, Majoring in Marketing. Many people do not know however that my marketing and entrepreneurial career began in an unusual fashion… with dog poop. After being the only soloist to reach the Wes Nicol Venture Competition finals, with a concept for biodegradable plastic dog waste bags (this was at the rise of the green era when this product didn’t exist), I was a recent graduate with no job prospects – so I went for what I knew, poop.

I engineered a design for the biodegradable dog waste bags and worked with a factory in China to produce them. Sales were entirely online based where I branded and sold the bags as ‘Doodeefulls’. In just over 3 years I had sold more than 4 million dog waste bags throughout North America. Business was good but I wasn’t as passionate about contributing to environmental clean-up, as I was about the online marketing elements of the business so I sold the company assets and began acquiring marketing clients.

Over time I realized that while I could generate results beyond business owners’ wildest dreams, but I was not a salesperson so I took a job managing the online advertising of Canada’s largest arch steel building distributor where I could hone my online marketing and sales skills and not focus on cash-flow. I was able to massively increase their lead volume while decreasing their cost per lead and was awarded the ‘Most Notable Achievement’ award for generating over 100,000 leads in a single year. Something which had not been done before in the companies 30 year history.

After two and a half years of hands-on skill honing, I moved up to the next rung of the marketing totem pole and became the Marketing Director of Skin Vitality Medical Clinics, which is Canada’s largest BOTOX® provider. With a strong leader at it’s helm Skin Vitality was an excellent place for me to learn how to manage a team of marketers and work in an incredibly high-competition market. After a year, word of my achievements had spread and clients were reaching out to me trying to have me market them on a contract basis. While I hated leaving Skin Vitality, the opportunity to work with so many major companies, and run my own business again, was too good to be true.

From there I founded an online marketing agency called The Ad Managers Inc. which had a focus on PPC and display advertising for lead generation. After just a year in business The Ad Managers was managing over $6 Million dollars in ad spend and had a staff of three. From there it’s been a lot of late nights and hard work, but the dream came through and a successful company was born.

Just in case you were interested in me personally, I am married to a brilliant veterinarian. We live in Toronto Canada with two crazy kids.

If there’s anything more you’d like to know about me, don’t hesitate to reach out and contact me!